Watching the White Sails in the Heart of the Ocean… 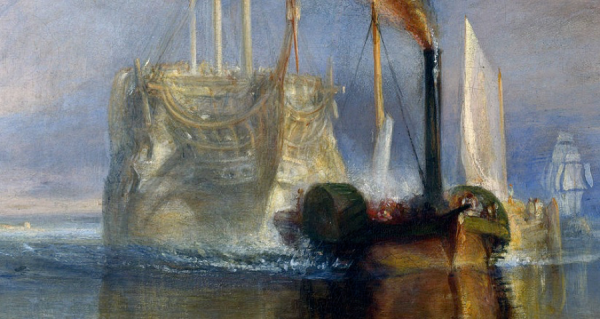 “Do we dream, or does the white forked sail drift nearer, and nearer yet, diminishing the blue sea between us with the fullness of its wings?” John Ruskin on Turner

In The Fighting Temeraire, it has long been presumed that Turner’s viewpoint would have been the London Embankment, watching as the famous and victorious Temeraire ship was decommissioned and towed from Sheerness to Rotherhithe. The artist also leads the viewer’s perspective, as we too borrow a Victorian lens onto this powerful moment in history. A black tug boat is depicted steadily pulling the graceful and ghostly Temeraire ship behind it. There is a sense of a ceremonial procession about the scene, and dramatic juxtaposition, the old ship on it’s last ever voyage, portrayed in the prime of her naval service.

Residing in the National Gallery in London, this painting is perhaps one of Turner’s most renowned and has even been voted Britain’s most popular.  The artist used a wide range of pigments, chiefly comprising of red, yellow, as well as focusing on the gentle, dynamic marriage of white and blue together.

During Turner’s lifetime, art and science were very much more interconnected than they are now. The Royal Academy of Arts (where Turner studied) was in the same building as the Royal Society of Science. Turner was intrigued by the newest scientific research and studied Johann Wolfgang von Goethe’s text, Theory of Colours which described the German writer’s views on the nature of colours from a more observational perspective. Goethe challenged Newton’s earlier theories regarding colour, crucially by his realisation that it is shaped by our sensual perception and by the way our brains process information.

This was fundamental to painters like Turner who could understand and develop their colour palettes according to its effect on viewers. It also meant that they could experiment with the sensory impact certain colours had on the viewer, and what happens, if for example, two colours are placed side by side. Whilst Turner was very interested in these scientific discoveries and applying them to his own work, he disagreed with Newton and Goethe’s theories. He felt their ideas were following a scientific spectrum of the rainbow and primary colours too rigidly, and lacking an appreciation for the tonal relationships in nature.

Turner had a broad and vivid palette. He had access to many colours through use of industrial products that were introduced in 1810, such as cobalt blue. He used a range of blue in his watercolours as well as in his oils, such as Prussian blue, Indigo and Blue Verditer.

It seems that Turner has purposefully contrasted the peaceful blue brushstrokes of the sky with the cool moon, alongside the blazoning, fiery red sunset. Turner had a very broad palette, experimenting with different colour combinations. However he often used ultramarine blue, and was actually the first accredited artist to use the synthetic version of this pigment. The French Government realized how important and in demand the pigment was to artists, and therefore even offered an award for the discovery of synthetic ultramarine which could be made economically.

Turner draws our attention to the centre of the painting, where there is a moment of stillness and calm. The sounds the viewer can imagine emanating from the scene are that of the quiet ripples of the large, however seemingly light and floating battleship, contrasted to the loud clanks of the tug boat. 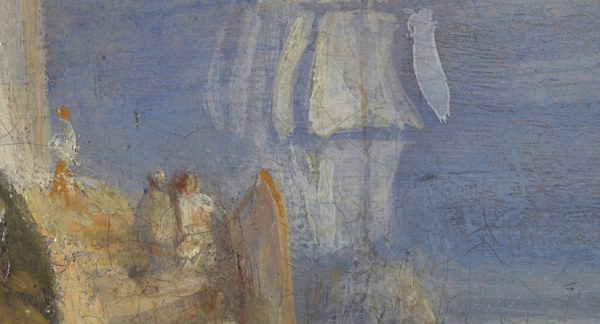 There is a moment of silence and calm here, accentuated by the lightness and luminosity of the white sails of the boats, against the backdrop of the diffused, calming blue horizon.

At the time, viewers felt the painting encapsulated a sense of grief for the loss of a great and victorious ship. It was seen as an elegy for the changing times which was brought about by the Industrial Revolution, and with this the arrival of newer, stronger machinery. It reads almost as a metaphor of the departure from the age of sail to the age of steam. However, this painting can be viewed as having a positive message, emphasized by the serenity of this central blue and white part of the painting. Also, of the elegance of the ship that Turner illustrates, whose naval history was held in high regard, continuing to be admired in this spectacle sight. Instead of there being a clash between red and blue hues, which may indeed serve to represent old and new naval models, we can choose to view this painting as a celebration of victory and modernity, and a synthesis of colour… 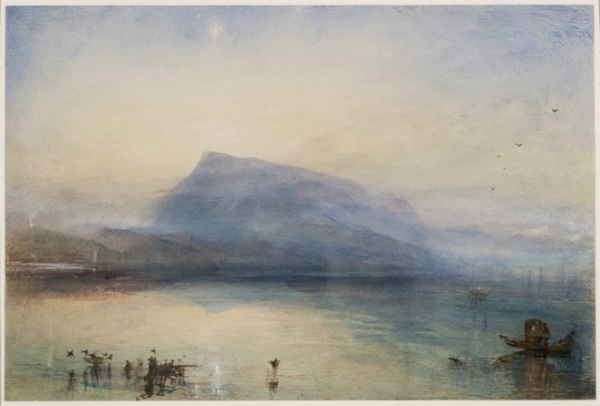