We had the pleasure to interview Belgian artist, Johan Van Mullem during his recent exhibition REVERENCE in London, following his successful exhibition Bleu-Topique at the Musee d’Art Classique de Mougins in France.

Driven by emotion and human gesture, Johan van Mullem’s art captures traces of ethereal portraits which radiate through earthly tones. Every face is produced intuitively, and each loose stroke and swirl is an instinctual motion which brings forward the presence of a figure. The Belgian artist is known for his unique use of oil-based inks on wooden boards, and he is also recognised for his pen drawings, sculpture, and landscape works.

We invited Johan to tell us about his artistic practice and his works in the Bleu-Topique exhibition. 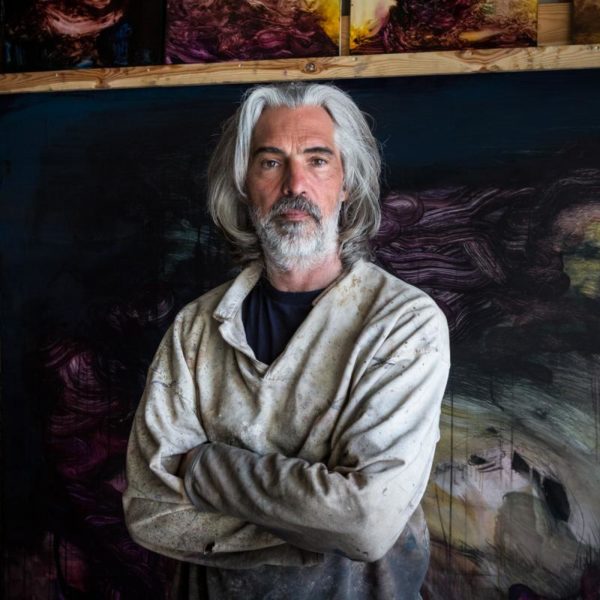 “A blue planet donned with a celestial vault and watered by the oceans. A blue museum. A blue jewel box. A timeless initiation through divine cut stones and their multiple attributes. An inexpressible universality invites to voyage and discovery. In a contemporary gesture I hang blue vestiges. Virtual fragments of our universal and collective memory. A dialogue between a white or blue dream and a blue or white reality, as with so many questions about what has been, is or will always be, bleu topique.”

As the title of the exhibition in Mougins suggests, the works shown presented a rich swathe of blues against the vivid blue walls of the gallery. The paintings were also accompanied by a series of biro studies on white packaging, as well as white busts and sculptures. 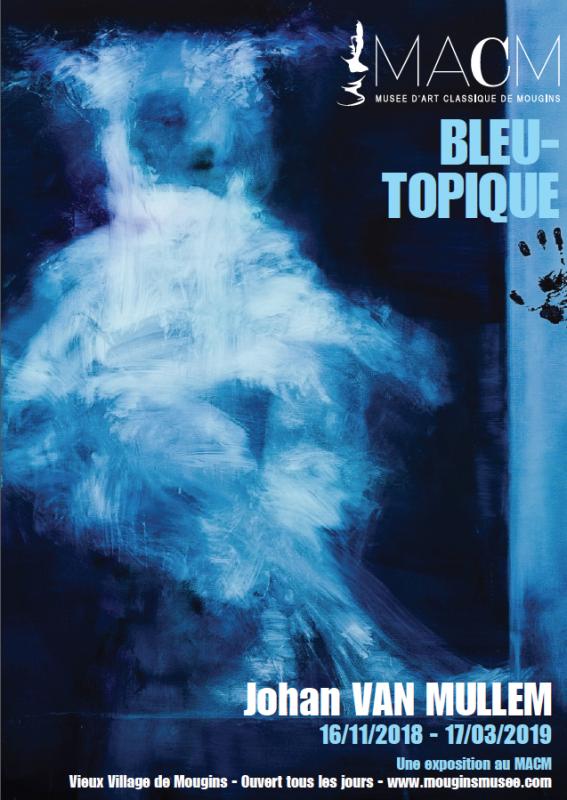 Firstly, why did you choose to focus on blue for a set of new work in contrast to any other colour for BLEU-TOPIQUE at Mougins Museum?

The choice might be influenced by the colour of the space in the Museum itself which is entirely blue. Together with the owner of the museum, Christian Levett and the director Mrs Leisa Paoli, the idea developed after different trials testing the blue colour and we found finally it matched quite well in the space, offering different angles and perspectives on all the different kind of blue colours.

How do you think blue impacts or affects the visitors, in contrast to your other works?

Blue offers at first sight an idea of peace, calm, freedom, liberty, and invites one to dream because it is linked somewhere to the sky, or the sea. A notion of infinity. The works, which are in general monochrome, also play with the notion of memories as well as black and white pictures. A museum therefore was a perfect place to introduce the blue colour. I also believe that having those blue drawings at the entrance permits to welcome the visitor with a recognisable sign because almost everyone uses or has used a blue ball pen (biro). 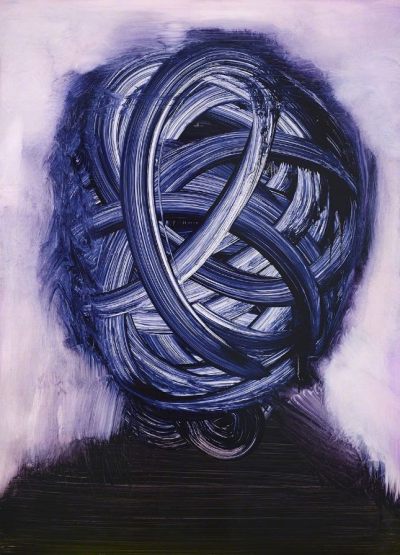 Why do you paint in ink, over other mediums such as acrylics/oils/gouache etc.?

It began with an “accident”. One day I absolutely wanted to paint but had no other material than the one I was using at that time for etching. So I started using those etching ink colours and never stopped until now. The support changes but not the ink. And I haven’t finished discovering all the power and secrets of those ink colours.

“Blue offers at first sight an idea of peace, calm, freedom, liberty, and invites one to dream because it is linked somewhere to the sky, or the sea.” Johan van Mullem 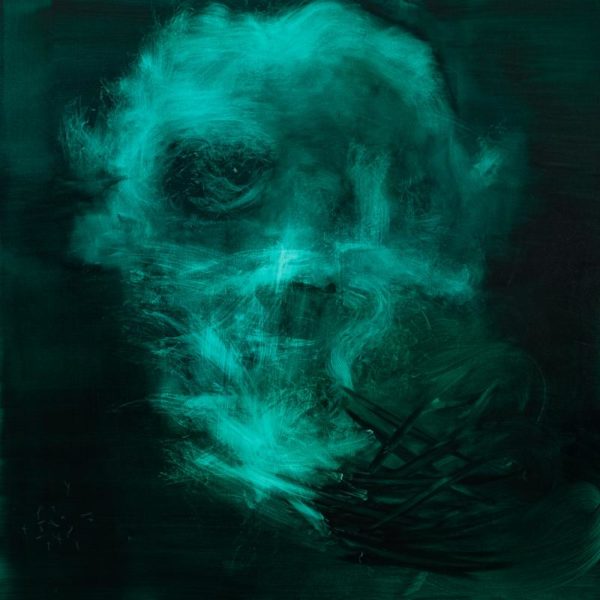 The love of creating starts for many of us in childhood. We wondered if you can remember what you were particularly interested in depicting when you were younger?

It is a strange but very simple story, I started with faces when I was young and still create faces until now. I was drawing with Chinese ink at that time and the faces where terribly marked by life with a lot of wrinkles. I was searching faces in magazines and newspapers.

Is there an artist or poet you can recall from childhood who inspired you to observe the world differently?
I always had the feeling that Rembrandt was member of my intimate family and that I could recognize his work.

Do you begin each work with an fully formed idea in mind, or do the traces of figures/portraits evolve and appear as you create? Has this always been the case?
There is no formed idea when I start but I have the strange feeling the painting is finished before I start. It exists in a form of energy that has to be transformed in an image. During the creation procedure things appear. Sometimes very clearly, sometimes hidden, but at the end the face exists. I should say exists “again” as it comes from somewhere. 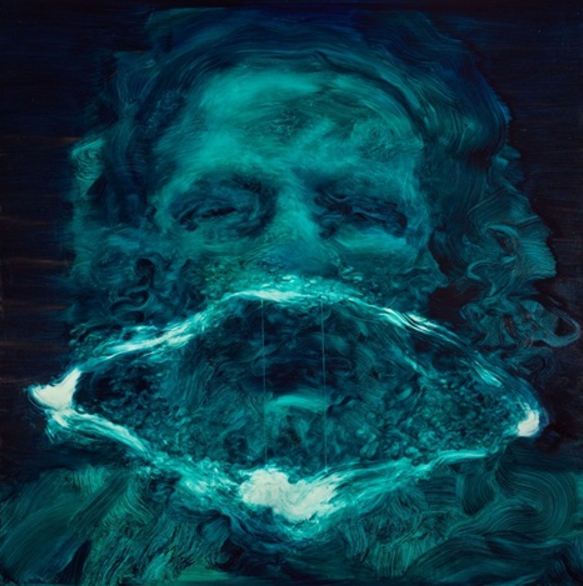 The prose written for BLEU-TOPIQUE holds a beautiful, deep message which frames the works in the exhibition. In your practice, do you often work with prose? If so, is it an inspiring force which starts a journey, or does it come afterwards?
I love to paint with words. It’s the same procedure with a different medium. It’s all about emotions. The more you allow your freedom and recognize the existence of the emotions you feel inside, they will find their own way to be born on a surface and you can be the first to be surprised by what happened. Words can come anytime. The problem is that we don’t always have something to write them down.

Do you have a personal quote or mantra that you live by?

I like to believe that “the best is to come”.

In BLEU-TOPIQUE, you presented a series of blue ballpoint pen drawings on packaging which were presented alongside sculpture and paintings. What were your motives for this choice?

Once again it happened by accident. I am a total paper lover! I suddenly discovered a piece of open packaging before throwing it away and it was a total surprise. I discovered the wealth of packaging offering multiple possibilities of forms and kinds of paper. I am creating my own collection of packaging now by verifying each one of them that comes in the house. 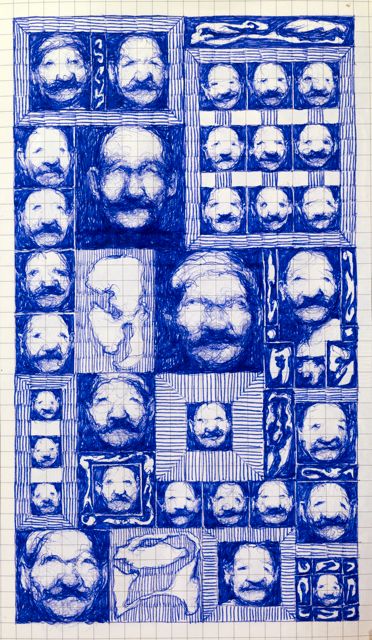 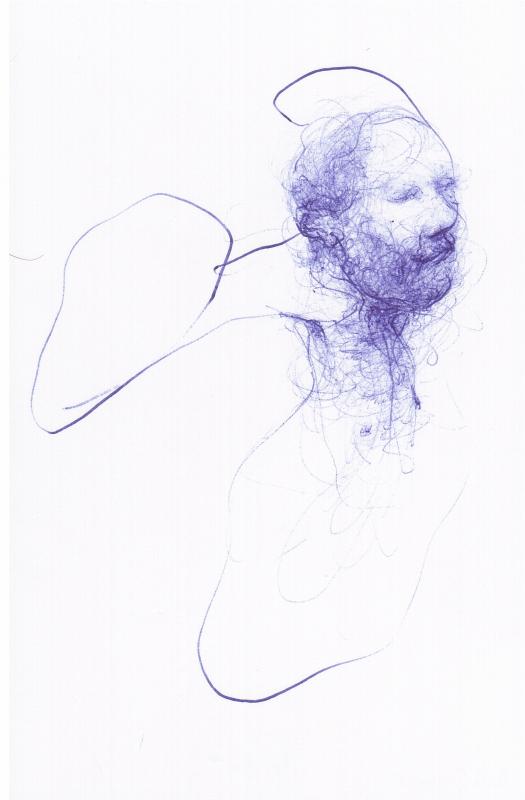 You have spoken before about the stories each colour has. What do you think the story behind blue is?
Blue is my blue line in life as I am drawing all the time. Having blue paintings gives me the feeling of lying in the nature. 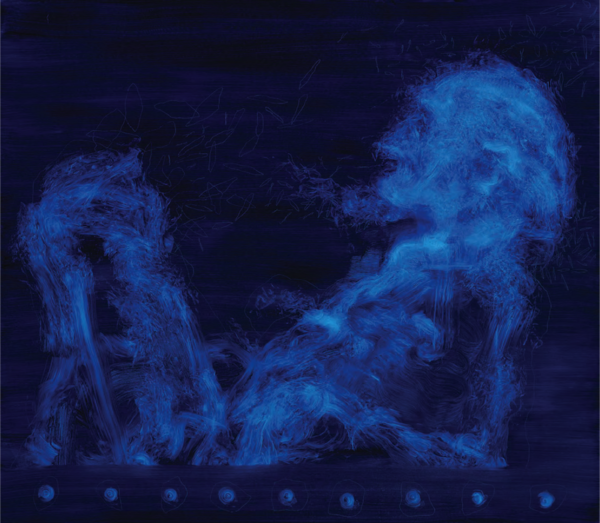 Why do you think blue and white is so recognised as a combination of colours, and what do you feel the story is behind this grouping?
It sounds more like a dialogue to me as the blue is the action and the white is the surface. I don’t use directly white colour. Life would be completely different if the sky was white with blue clouds, or with a white sea and blue waves. What about white eyes instead of blue eyes?

“Having blue paintings gives me the feeling of lying in the nature.” Johan van Mullem

And finally, in the past you have said nature inspires you, is this true for each season or does one season connect/reach you more deeply than another?
I have the chance to live close to nature and particularly in front of a forest where I walk, jog or ride every day and have a privileged view on the miracle of nature. Seasons can last a second or eternity but each one of them tells the story of life by making the coming season possible. 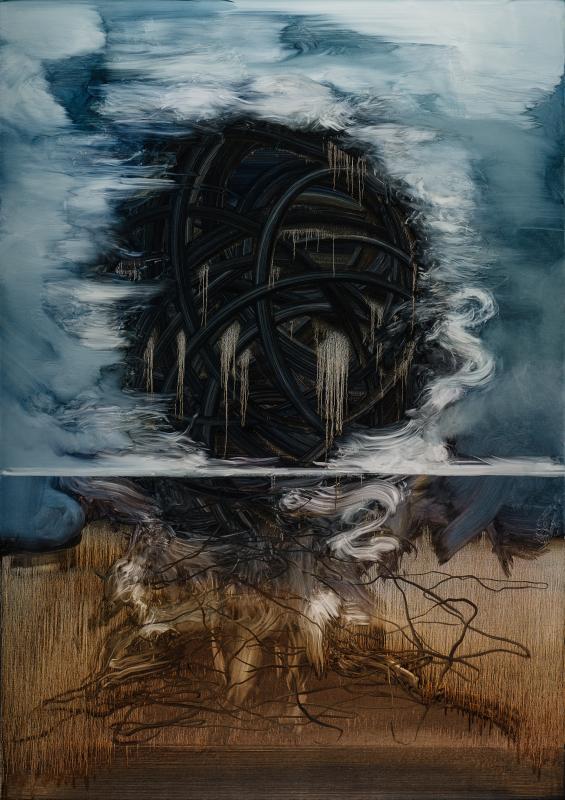 “Life would be completely different if the sky was white with blue clouds, or with a white sea and blue waves.” Johan van Mullem