In the mid sixteenth century the Eighty Years War took place, which had a big impact on art making and buying. When the citizens of the Netherlands revolted against Spanish rule under King Philip of Spain, taking back their independence, the result was the dissolution of the powerful Royal court. Protestantism became the dominant religion, overtaking the previously Catholic Spanish Netherlands. Therefore, instead of the wealthy upper classes buying art, it was now the middle classes who were, as they were in majority. 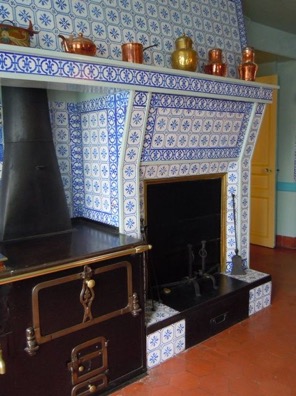 Image of Monet’s kitchen from his home in Giverny, France.

Delft Dutch tiles were both decorative and practical in purpose. They were used in a variety of different ways within the home. As so many towns in Holland were built alongside canals, their cellars were damp and therefore lined with tiles to keep damp out. Fireplaces were lined with tiles to make them more fireproof, the glazed surfaces of the tiles encouraged the heat to stay in the room through reflection.They were also used in the skirting to close the gap between the floor and the wall. As they became more popular over the decades, factories started appearing for tile making throughout Holland. The blue and white colours of the tiles was influenced by Chinese porcelain, which had become popular as a result of Dutch trade with China.

Dutch tiles have always had an appeal since they were made in the sixteenth century. A major reason for this is that, within the history of tiles, Dutch tiles have in fact incorporated the largest range of subject matter, catering to a variety of different interests and tastes. A defining feature separating Delft tiles from others however was the artistic representations of figures painted onto the surfaces of them.The middle classes who bought these tiles wanted to buy tiles with subjects ‘which mirrored the immediate world they knew’, typically scenes of daily life in the Netherlands. They were not interested in grand religious or mythological scenes, as these subjects did not speak to a world that they could relate to. The genre of everyday life became a key subject for Dutch painters too, such as Vermeer –  it is simply known as ‘genre painting’.

Subject matter for delftware tiles was taken from what was available in printed images. Reproductive prints made by printmakers, copied from paintings were popular at the time as a way of producing multiple copies of a work that could be distributed to a wider market. Prints were also created for book illustrations, and these were often the printed images that would inspire decorators of Dutch tiles.  Scenes of animals, children playing, mythological creatures, people at work, landscapes, seascapes and artefacts that were likely to appear in Dutch villages such as windmills and houses were common subjects. 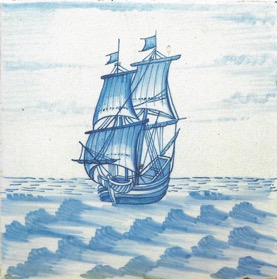 The subject of children at play wasa very common theme in Dutch tiles, as it was rooted in tradition from Flemish paintings. A famous painting by Bruegel the Elder called Children Games, coveys over ninety games. When you look at these kinds of paintings, there are pockets of narrative everywhere, which is endlessly curious and absorbing. This would have provided a wealth of material for artists to create and mimic characters and narrative scenes for Dutch tiles. They would either copy figures directly from prints or indeed paintings, or create fictitious characters inspired by details in paintings like Bruegel’s. In these tiles, children are often shown involved in a variety of activities including walking on stilts, skipping, leapfrog and playing with hoops. 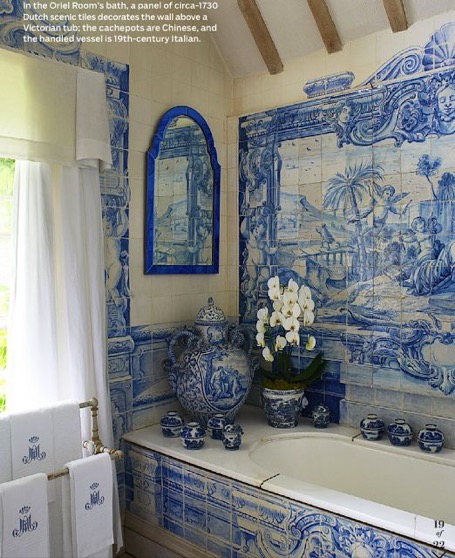 Cherubs are quite a significant theme in Dutch tiles also, sometimes playing games like children or representing mythology, as in depictions of Cupid. They most likely would have derived from Italian Renaissance art where playful cherubs are found in painting and sculpture. 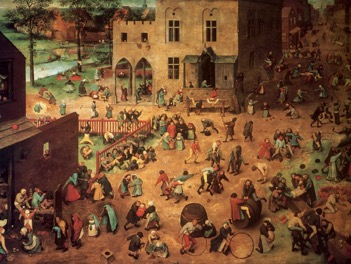 Children’s Games, by Pieter Bruegel the Elder, 1560, oil on wood (Kunsthistorisches Museum Wien, Vienna). Below a detail of the bottom centre.

Scenes from daily life were also very popular. People were depicted absorbed in their work. You can find tailors, carpenters, brick-layers, blacksmiths, artist behind their easels, weavers, basket-makers, shoemakers and fishmongers and musicians on tiles.  These painted figures were also a way of illustrating the seasons, denoted by the different types of activity being undertaken, such as children snowballing or sleigh riding. 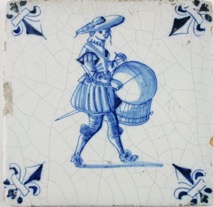 At the Blue & White Company, we have loved recreating the figures that continue to share the stories of everyday life, with individual figures at work and at play decorating coasters and magnets, jotter pads and tea towels… 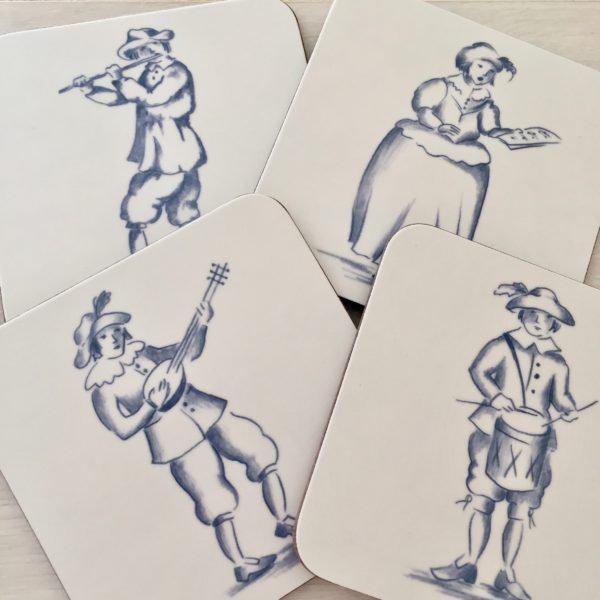 Our coasters are decorated with botanical and musical figures 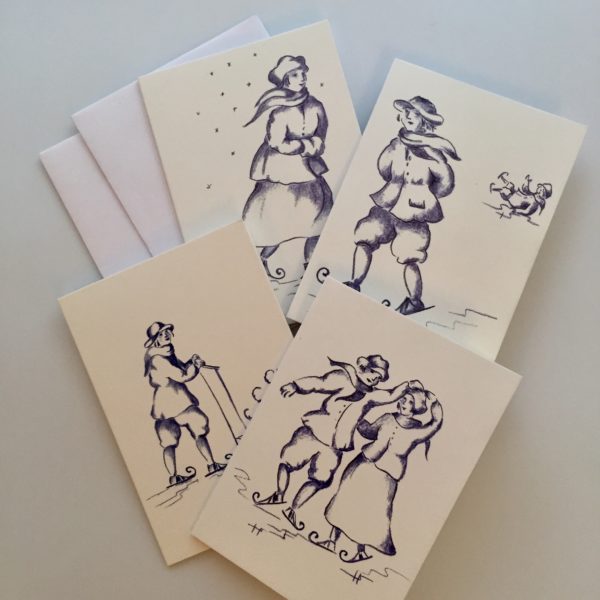 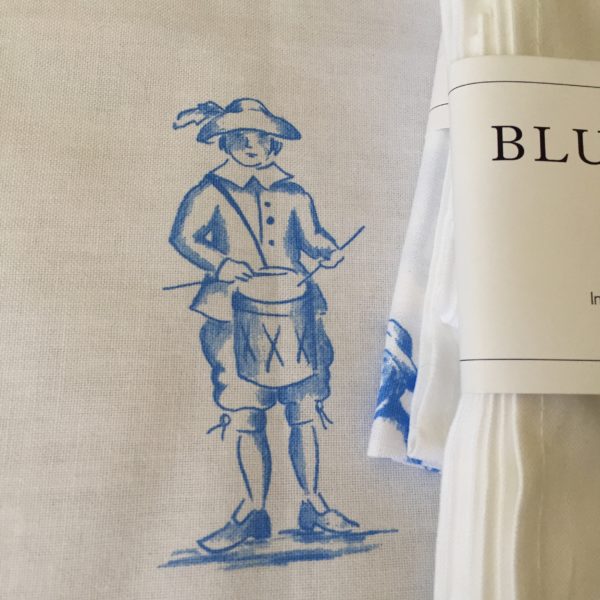 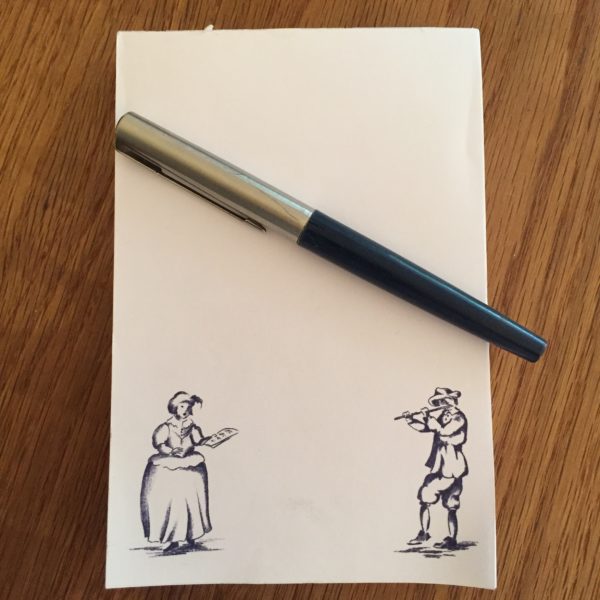 Jotter pads to inspire your imagination…