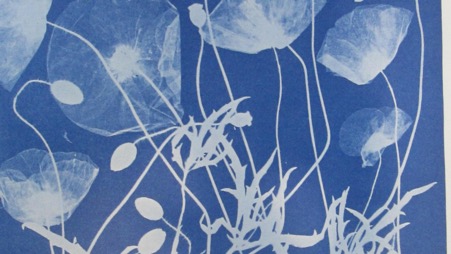 “Looking at Atkins’ book today, what is most striking is not the outlines of the algae, however beautifully and delicately they crawl across the pages; it is the glorious depth of the Prussian blue backdrop to the images.’

Photography has always been on the cusp between science and art. Someone like Anna Atkins has been instrumental in bridging the gap between these two fields. For a long time she was not well known, seeming to have slipped through the passages of time. However since the 1970s, she started to gain wider recognition and is even thought of now as the first female photographer, as referenced by the author Joanna Moorhead in her book ‘Blooming Marvellous: the world’s first female photographer – and her botanical beauties‘ 2017.

Atkins’ images are striking, delicate, extraordinary. They are a collection of light blueish-white imprints of algae and other plants, elegantly swimming on a deep Prussian blue background. From the impressions left behind from these organisms, we get an insight into the texture and weight of them in reality. Some of the prints are so fragile, for instance one of leaves with intricate tracery, like spider webs. Whilst in others the plants are robust; blocks of white, like paint strokes on a blue canvas. 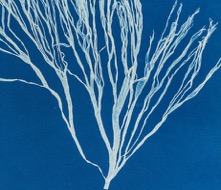 From a very young age Atkins’ life was immersed within the sciences. She was born in England in 1799 and shortly thereafter, her mother died. Atkins’ father John Children, a well respected scientist and associate of the then, as now, prestigious Royal Society, taught his daughter all that he knew, an unusual privilege for a young girl at that time.  It was in fact through her father’s connection to the Royal Society that she was introduced to fellow members and early photography pioneers such as William Henry Fox Talbot and Sir John Herschel.

In 1841, Fox Talbot announced his new invention, the ‘calotype’ process, or as it was sometimes called the ‘talbotype’, after its inventor. Fox Talbot had previously been experimenting with photographic processes, but the calotype was the one for which he became renowned. It involved using a sheet of high quality writing paper that was then made light sensitive using chemicals. In almost complete darkness, the paper was loaded into a camera and exposed to a scene in front of it which would produce a negative, or invisible image on one side of the paper, coming out in a deep brown or black. He also learnt how to make positive prints from the negatives. 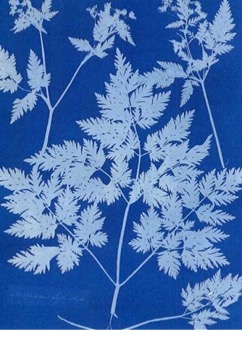 Meanwhile Atkins had developed a keen eye for botany and was recording shells and plants as drawn by hand. Her father told her of Fox Talbot’s new photogram invention and the pair experimented with it. A year later in 1842, John Herschel sent Children a copy of his paper, which refined Fox Talbot’s calotype process. He called this the ‘cyanotype’. It arose from his discovery of the light sensitivity of iron salts.

The process used two chemicals, ammonium ferric citrate and potassium ferricyanide, that were brushed onto a sheet of paper. Once the paper had dried, something flat like a plant specimen was laid on top of it and both left in sunlight. Depending on the exposure time the resulting image would be either faint or bold. The paper was then washed in water, instigating the process of oxidation, which would leave a negative image on the sheet, consisting of a white impression from the specimen, the remainder of the sheet being of a blue or cyan colour. 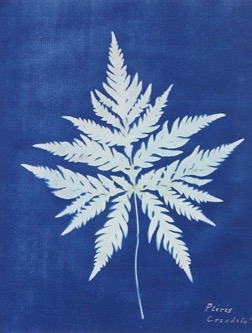 Atkins was fascinated by this process and quickly adopted it herself, being one of the first to experiment with the process. A few decades later it was commonly utilized by engineers and architects to copy plans, which lasted until the 1950s.

In 1843 Atkins published her own book entitled British Algae: Cyanotype Impressions, one of the first photographically illustrated books. It is a catalogue of a wide range of algae found off the coast of Great Britain. There are only thirteen of these handmade copies in existence. It consisted purely of cyanotype illustrations of algae.  It was not for commercial gain that she produced the books, instead they were a product of a deep fondness and curiosity for botany which she wished to share with others.

As Joanna Moorhead has commented, ‘Atkins realised what millions of social media users know today: that images are for sharing’.

Atkins brings to life the incredible beauty of the natural world, even in the most overlooked of plants, such as seaweed. The duality between the two colours white and blue creates powerful silhouettes which appears contemporary, abstract even. She thought carefully about how to position the algae, creating unique compositions that dance on the paper with vitality. Atkins paved the way for the use of photography in scientific publishing and her legacy will live on, continuing to encourage viewers to appreciate plants in a new and different way… 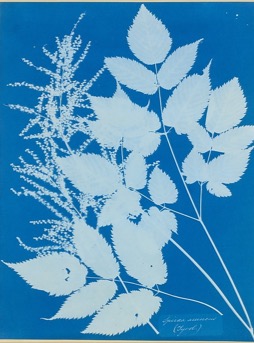 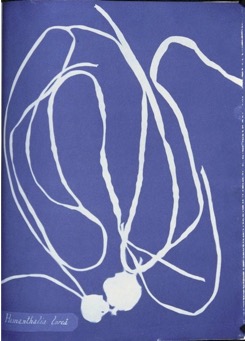