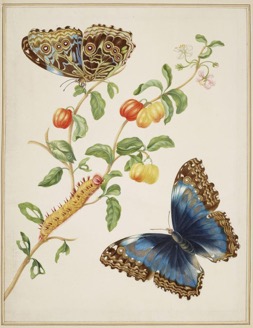 Maria Sibylla Merian was born in 1647 in Frankfurt, Germany. Her father Matthäus Merian (the Elder) was a well known engraver and publisher, who ran a flourishing publishing shop in Frankfurt. He died when Maria was three, but the shop continued to be run by other family members. There was a great deal of work going on and ‘every hand was busy…there was ink to be mixed, paint powder to grind, and copper plates to polish and wipe.’ 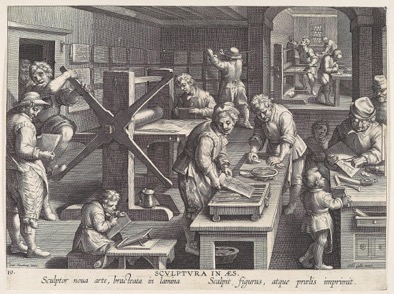 The shop attracted all kinds of interesting visitors. Many of them had had adventures and discoveries within the ‘New World’.They were keen to tell others and publish insights from their travels to America, where everything was different and new, including plants and insects.

For Maria, working in her father’s shop was a perfect place to soak up all these exciting stories and learn more about what was going on around the world. New ideas continuously flowed from the printing presses in the print shop. Maria’s father and his apprentices would create plates for new books; engravings of maps and illustrations of these exciting discoveries explorers had made on their grand voyages.

Although Maria had already developed a burgeoning fascination with flies, spiders and caterpillars by the age of thirteen, you can see why the stories of strange, unknown lands in America would have sparked the imagination of her young mind. Especially as majority of children’s books were not published until the end of the 18th century.  Loitering inside the shop, she would have been like a fly on the wall, soaking up all the new information about these mysterious bugs and plants. As Maria would not have known about these insects because they generally thrived in hotter countries, it must have fascinated her to hear about them from travellers stopping by. 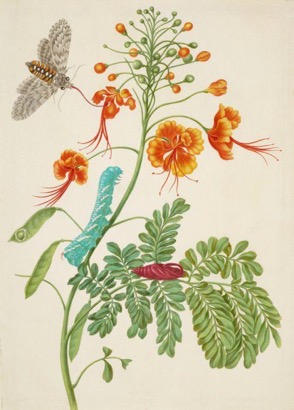 After her father’s death, Maria’s mother married a flower painter Jacob Marrel. One of Marrel’s pupils Johann Graff of Nuremburg taught Maria to paint. They then married later. She was most interested in entomology (the study of insects) and made many wonderful prints and watercolours of them, later published in 1679. After being shown a collection of tropical insects, which were brought back from Suriname in South America, Maria made up her mind that she wanted to travel to Suriname to see what kind of insects lived there and to examine the botany herself, and years later made the voyage with her daughter Dorothea.  Her male friends and family members persuaded her not to go, concerned for her safety, but the steadfast fifty-two year old was determined. So they set off, by boat, from Holland to Suriname.

Maria and her daughter stayed in South America for nearly two years! After catching malaria, she was forced to come home. However, Maria recorded and studied plants and insects that she had observe in the jungle; chiefly, the life cycles of moths and butterflies and the metamorphoses they undergo. This area of science was largely unknown at the time. Her findings and vibrant watercolours were later made into her most significant book, a magnificent publication called Metamorphosis Insectorum Surinamensium, published in 1705. It is quite breathtaking to see such detailed and brightly coloured depictions of such small creatures as insects, and to understand more about the worlds existing around us and beneath our feet. 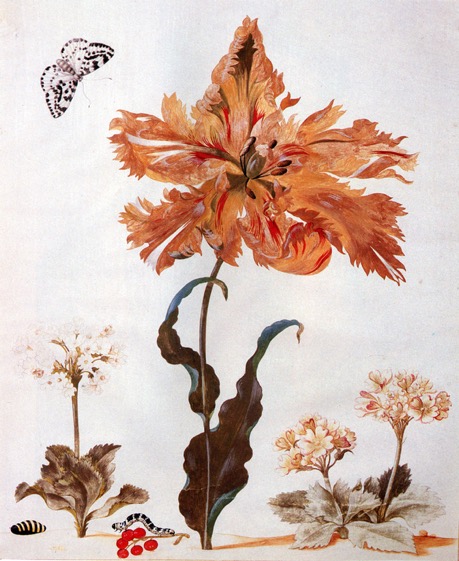 A Parrot Tulip, Auriculas, and Red Currants, with a Magpie Moth, its Caterpillar and Pupa, Maria Sibylla Merian. Chalk and watercolour on vellum. Image from Botanical Art and Artists website.

Without a doubt, Maria revolutionised the world of plants and insects. The fields of art and science were very connected at the time, and not seen as two distinct professions, as evident in Maria’s beautiful illustrations of her scientific discoveries in the ‘New World’. Indeed, David Attenborough considers Maria and her finding to be ‘among the most significant contributors to the field of entomology.’ Her unwavering absorption and commitment to the natural world, to unearthing new ideas by travelling long and very dangerous distances, continues to fascinate and be an inspiration to us all.

Here at the Blue & White Company, the decorations on our collection of porcelain is inspired by Maria’s work and passion… 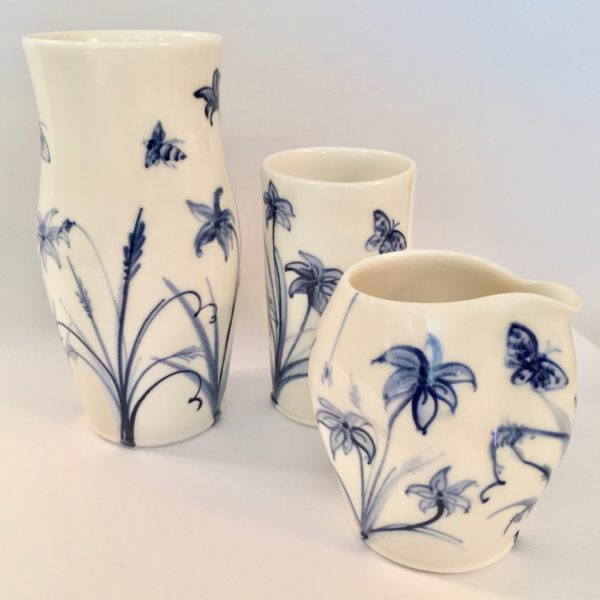 “There is a common denominator that links all botanical artists. It is the profound joy that all feel who observe the natural world with a sustained and devoted intensity​.”