The Textured World of Ingres 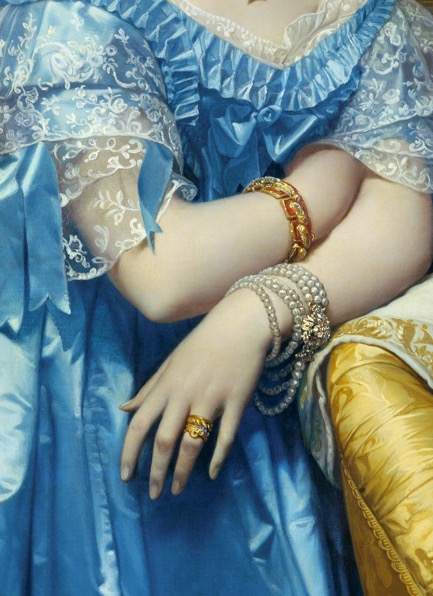 The textures and details of our homes remain such a key part of our lives.  It’s what often draws us towards one another as we recognise a shared love of a certain style be it classical or rustic, and each create our own nurturing space.   Textures can offer comfort and reassurance whilst objects and their details can often be the source of family stories, bringing memories alive.

The Old Masters were exceptionally skilled in depicting textures within their paintings, of lace, satin and velvet. In many of the surfaces of the paintings, they appear completely flawless, as smooth as a photograph, with hardly any visible brushstrokes. The artists create a fantastic illusion of the textures being real, rather than paintings of textures. This can make us as viewers feel somewhat present in the scene, as if we were really there.

When artists depict textures to an extreme level, with pretty much photographic realistic, it is called “trompe l’oeil”, French for “deceives the eye”. Like an optical illusion. Jean Auguste Dominique Ingres was one such painter who had outstanding technical virtuosity for realising textures and surfaces in paint. He was born in 1780, and was taught in the Neoclassical school under the painter Jacques-Louis David. Neoclassicism in art was deep-rooted in academic tradition, focusing on the study of the nude and classical art, looking back at the precedents of the great Renaissance Masters, especially Raphael. 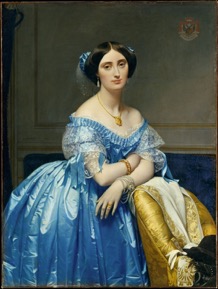 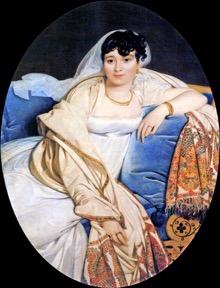 Ingres’ painting The Princess de Broglie (1851-53) is one of his last ever portraits and is very characteristic of his style. The princess leans on a golden chair inside a room, wearing a magnificent, striking blue satin dress with lace detail around the arms. Her arms are crossed and her hair is tied up with blue decoration.

This portrait is seamless; it is almost impossible to believe that this work was made by hand, as there is little to no visible brushwork. She is given the qualities of a Greek sculpture (as the image below): her big eyes, her soft pearly white skin and elegant long limbs. The Princess is so radiant; it is as if light actually emanates from her. The anatomy is somewhat believable, but Ingres often transformed his sitter’s skeletal structures in his compositions. He deliberately elongates her forearms and neck for example and avoids painting shadows or definition of bone or musculature (artistic licence) to emphasise the suggestion that she is an ethereal being, reinforcing her status in society.

Marble statue Venus de Milo, by Alexandros of Antioch, between 130 and 100 BC (The Louvre, Paris)

Ingres captures the shy reserve and perhaps even melancholy of the Princess. She looks out towards the viewer, her gaze almost going straight past us. The textures and colours are lush, luxurious, hard to take your eyes away from. The skirt of her cool, icy blue dress falls in multiple pleats and creases with “shimmering highlights and deep shadows.” We can almost hear the movement of these pleats, rustling as she breathes and moves, making us feel a part of the scene.

Ingres would have, like many other artists of the time, painstakingly recorded the meticulous details in the lace the Princess wears. Lace and netting was first developed in Europe during the sixteenth century and became increasingly fashionable to wear during Elizabeth I’s rule, in which complex ruffs and standing collars demanded elaborate and intricate geometric designs. 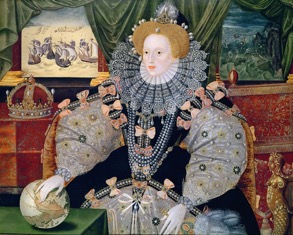 Before machine-made lace there were two types of lace making, needle lace and bobbin lace. Needlelace is made with a single needle and thread, while bobbin lace entails the plaiting of many threads. Needle and bobbin laces were often named after the region or town where they were made. Both men and women wore lace and it became a sign of the aristocracy and of sophistication. Later silk and metallic gold and silver threads were used, as an increasing demand was for gold and silver lace to edge gloves, shoe roses, jackets and sashes and for decoration for other garments.

Ingres is not as well known as other historical French painters who have overshadowed him, such as Delacroix, Renoir, Manet and Monet, who are much better known. However, the exquisite rendering of textures in his work cannot be underestimated and Ingres work remains vital in the development Western art. 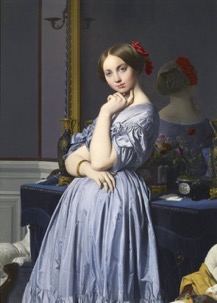 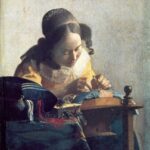 Our love of texture, design and detail is what guides our product selection here at the Blue & White Company from table linen to handmade products and always with your home in mind…