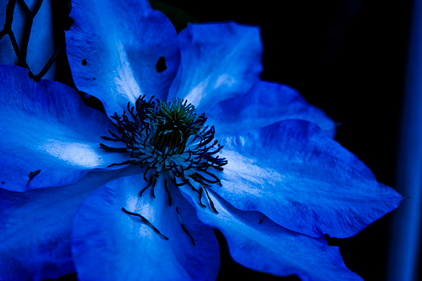 One of the most prevalent symbols to emerge from the German Romantic literature between the late eighteenth and early nineteenth centuries was that of an elusive Blue Flower, or Blaue Blume. This derived from the renowned novel of the period Heinrich von Ofterdingen, published posthumously in 1802 by author and philosopher Novalis.

The story centres around the hero Heinrich, a medieval poet, who endures sleepless nights, while powerful and lucid dreams of a mysterious Blue Flower permeate his mind which he has heard about from a stranger but never seen. He dreams of embarking on a journey to find the the flower, of entering a cave with bluish light and finally seeing the Blue Flower in a meadow. On the way, Heinrich meets a shepherdess called Cyane who helps him on his journey…

“He swam gently down the glittering stream…Dark blue rocks with various colored veins rose in the distance…But what most attracted his notice, was a tall, light-blue flower, which stood nearest the foundation and touched it with its broad, glossy leaves. Around it grew numberless flowers of varied hue, filling the air with the richest perfume.” 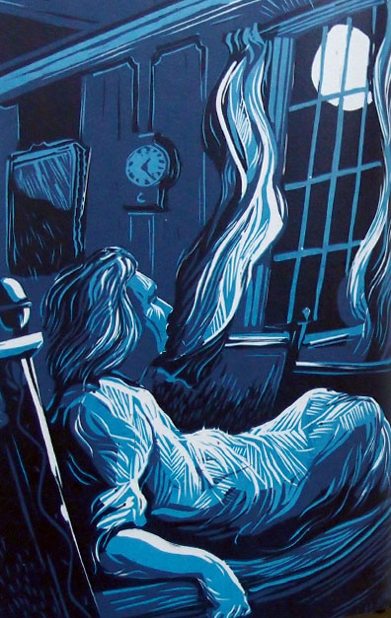 Linocut illustration from The Blue Flower novel by Penelope Fitzgerald commissioned by the Folio Society, a reimaging of the original German novel.

In Novalis’ story, Cyane tells Heinrich that she is the daughter of Mary Magdalene.  In making this connection, Novalis potentially subtly retains the heavenly associations awarded to the semi-precious blue lapis stone, whose pigment so abundantly depicted the most prized part of medieval paintings – the Virgin Mary’s drapery.  When Heinrich finally sees the flower in his dream, he also envisions the face of his beloved. The flower is actually unreachable, it is only something that can be sought but never found, hence the hero only dreaming of it and never holding it in his hand himself. 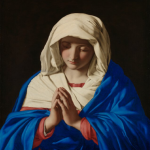 The Virgin in Prayer, Sassoferrato 1640-50. The National Gallery, London.

The Roman poet Ovid was the first known Latin writer to mention Cyane in his work Metamorphosis.  Although his writing has been interpreted in many different ways, it seems that Cyane was a water nymph. One day, she happens to witness an ominous scene, moments before it is about to unfold, the abduction of the goddess Proserpina by Hades (God of the Underworld). Rising out of the water, Cyane attempts to oppose Hades and prevent the abduction yet she is unsuccessful, and weeps. Hades then entirely dissolves the water nympth into tears, fusing her with the water fountain in which she eternally remains.

In the story, the fountain is made of blue stone and inside silky fish shimmer, who are all beautiful shades of blue… 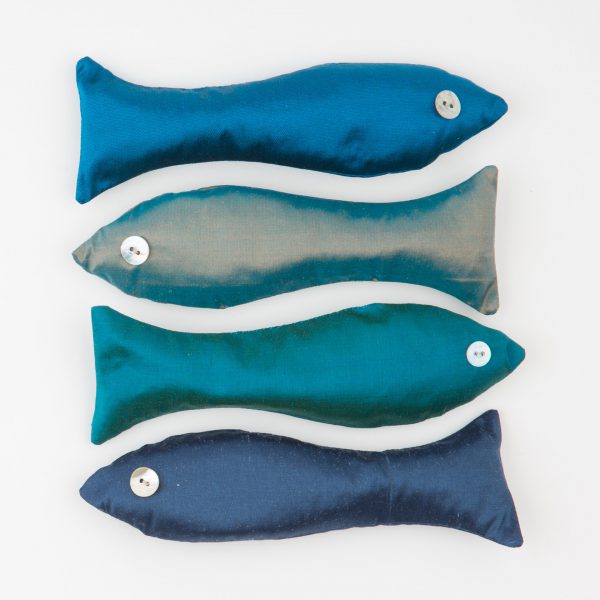 In more recent times, in 1908, the message of the Blue Flower emerges in a play calledThe Blue Bird by the Belgian playwright Maurice Maeterlinck. This was a story for children, along a similar storyline to Hansel and Gretel. A brother and sister Mytyl and Tyltyl must help a little girl whose illness can only be cured by the magical Blue Bird of Happiness.  Like Heinrich’s search for the Blue Flower, the children go on a quest through a Land of Memory to the Palace of Night to find the Blue Bird and also receive help from a good fairy:

“They passed through several turquoise and sapphire galleries. It was magnificently beautiful…the Bird of the Future soaring above their heads, mingling with the azure sky its dream-wings so blue, so light and so transparent that soon the boy could make out nothing more…”

The legacy of the blue flower, put forward by Novalis’ story during the Romantic period, was an inspiration to creative artists and writers in future generations. Mention of it can be traced to C. S Lewis in his autobiography Surprised by Joy published in 1955, where he states: “before I was six years old, [I was] a votary of the Blue Flower”, acknowledging the sense of longing for something that only exists in imagination and not in reality.

The Blue Flower was drawn on by artists of all kinds to convey their deepest feelings. This quest for the flower came to symbolize many things including love and the power of the imaginative realm.