Vermeer & Music in Art: A Portable Pharmacy for the Soul… 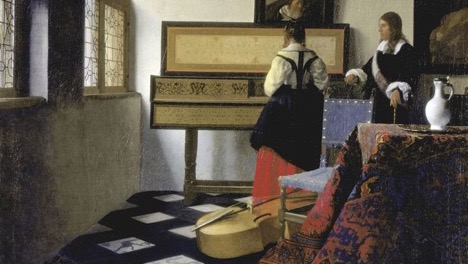 Detail of The Music Lesson by Johannes Vermeer, 1662-1665, oil on canvas. Image from the Royal Collection, Buckingham Palace, London

Music permeated life in seventeenth century Delft, as well as in other European countries. It was common practice for music to be performed, by women especially, but also by men, as a way of entertaining guests and others in the room. Music could be heard inside homes, outside by street performers and at special events like banquets, processions and weddings; a means of bringing people together but also to feel… to rejoice, celebrate, or commiserate.

When considering the theme of music in painting, it posed a challenge for artists to incorporate a realistic impression of sound onto a two dimensional, visual plane. They attempted to overcome this by evoking the atmosphere of music in the interior space, to stimulate the viewer’s imagination. In these paintings, we of course cannot actually hear any notes being played but certain compositional elements aid in stimulating music within the mind. Features such as including a musical instrument or a few together, a musician engaged in playing and a figure with slightly parted lips to suggest singing can all lend an audio-visual experience to the imagination of the viewer.

It has been said that twelve out of the thirty six surviving paintings by the Delft Master, Johannes Vermeer convey musical themes. Interestingly, the four paintings by him in the UK are all of musical themes. There are: the two Virginal paintings in The National Gallery in London called A Young Woman Seated at a Virginal and A Young Woman Standing at a Virginal, The Guitar Player in Kenwood House and finally, The Music Lesson in The Royal Collection, Buckingham Palace. 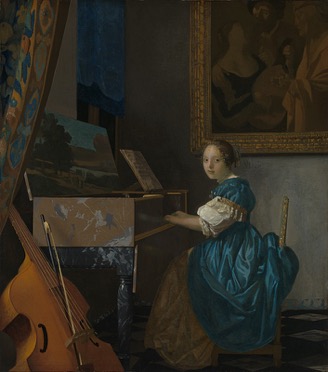 A Young Woman Seated at a Virginal, Johannes Vermeer, 1670-1672, oil on canvas, The National Gallery, London 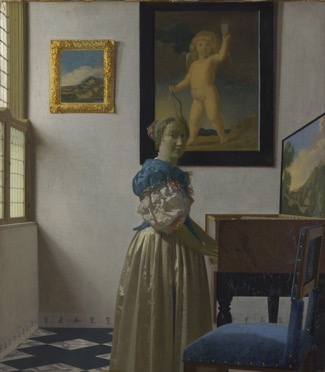 A Young Lady Standing at a Virginal, Vermeer, 1670-1672, oil on canvas, The National Gallery, London

Vermeer almost exclusively painted figures who are absorbed in solo activities within an interior space. He was extremely adept in exuding calm and tranquility from his scenes, whilst also indicating the passionate and emotional inner life of his figures, behind this look of serenity. His musically themed paintings seem to emphasise this inner life, playful, and at times melancholy, as we reflect on the nature of music and its power over the human soul. 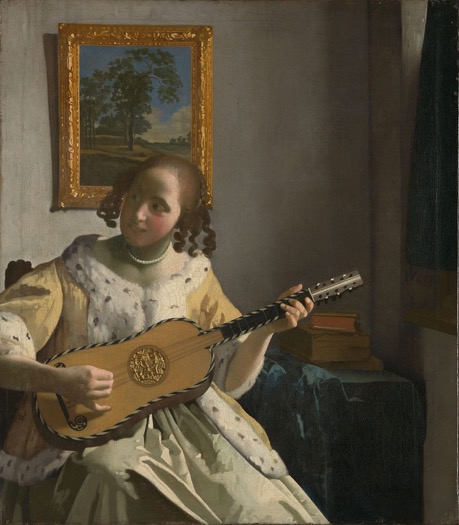 The Guitar Player, Vermeer, 1670-1672, oil on canvas, Kenwood House English Heritage as Trustees of the Iveagh Bequest, London. This representation suggest the more contemporary music of the guitar than the conservative traditions of the lute.

In A Young Woman Seated at a Virginal , a woman wearing a blue, white and beige dress sits at the keyboard inside a room and in A Young Woman Standing at a Virginal a different woman stands with her fingers just resting on the keys.  The correct term for this type of virginal is actually muselaar virginal. Like a harpsichord, it has a keyboard, but this is positioned to the right of centre and produces a characteristically warm sound.

A viola in the second half of the 17th century. The lute and the viola de gamba are probably the most represented instruments throughout the centuries in art. The soft, clear tones of the viola often accompanied the lute. 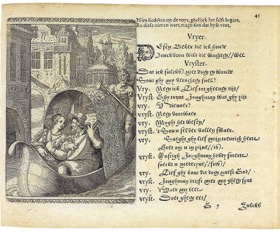 A page from The New Improved Pleasure Garden, 1607, by Michael Vlacq. This image is from Marjorie E. Wieseman’s text, Vermeer and Music, from the British Library, London

The Dutch in the Netherlands were unique in embracing the printed songbook, developing it into a fine art itself. The most popular songs were about love.  These prized possessions became more elaborate as publishers became competitive. They often included engraved illustrations and poetic verses. Young men would give them to their sweethearts as love tokens, as the songbooks could be small.

Interestingly, none of Vermeer’s songbooks are readable, which may well have been deliberate to heighten ambiguity and allow the viewer to project their own song onto the sheet music.

Vermeer often leaves clues within the painting for the viewer to interpret the scene and include themselves. For instance, both women from these paintings gaze directly out at the viewer, implying they are performing for us, and bringing us closer into the depicted room, involving us in the narrative. Furthermore, the unattended viola de gamba near the Seated Woman and the empty velvet blue chair beside the Standing Woman may allude to a second person previously present, and invites the viewer to ponder this. There is also a viola de gamba in the foreground of The Music Lesson. The women in these paintings both appeal to the viewer to join in the harmonious and implied binding love. 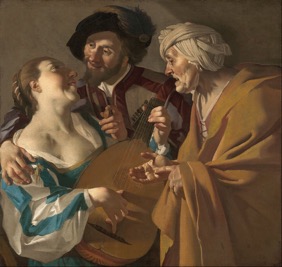 The painting behind A Young Woman seated at a Virginal which is The Procuress, Dirck van Baburen, 1622, oil on canvas. The National Gallery, London 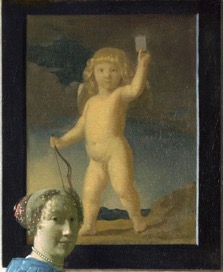 Critics believe that the painting behind A Young Woman standing at a Virginal makes reference to Otto van Veen’s engraving from Amorum Emblemata, 1608 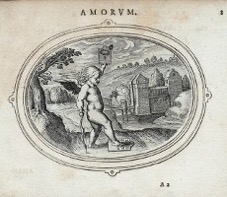 Many Dutch paintings at this time made the association between music and love. The virginal, which was often played by women, was seen as a symbol for harmony and concord. In A Young Woman standing.., a painting of cupid holding a playing card is hung on the wall behind the woman. The painting is believed to be derived from an engraving emblem by Otto van Veen, which has a Latin inscription with the dictum, ‘there can only be perfect love for one person’. Curiously, the upheld card in the emblem displays a Roman numeral “I”, however in Vermeer’s the card Cupid holds is blank.  Contrastingly, the painting behind the A Young Woman seated.., is of Dirck van Baburen’s The Procuress, a subject denoting lascivious behaviour and seduction. We are left to make up our minds about the music being played, or indeed the lives of the women…

In the Virginal paintings there are delftware tiles on the skirting, beside the women. It is difficult to see all that they show, as the detail here is so meticulous and small. However, from zooming in, it seems they illustrate typical subjects of everyday life for delftware tiles, boats and people at work. Although Vermeer may simply be painting the tiles situated in front of him in the room, the inclusion of the boats in both works seems to suggest how music can transport you to another place. It can be both calming and tumultuous, like a boat at sea. 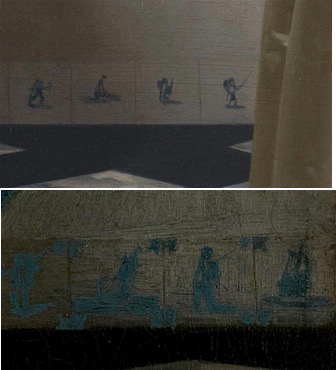 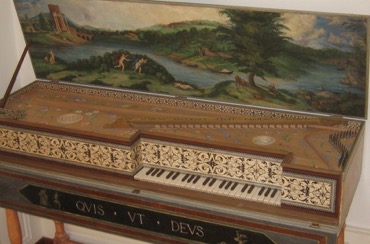 Flemish muselaar, illustrated within the lid is a painting of Orpheus and Eurydice. Image from Classic FM website.

It was characteristic for virginals to have a painting on the lid. The builder of the instrument would often leave the underneath of the lid plain so that when bought, clients could employ a separate artist to paint a scene of their choice. In the case of the Young Woman Standing, we can see a snippet of a painted landscape, again emphasizing this idea that like art, music can also mentally take us away to an idyllic landscape, to another realm… 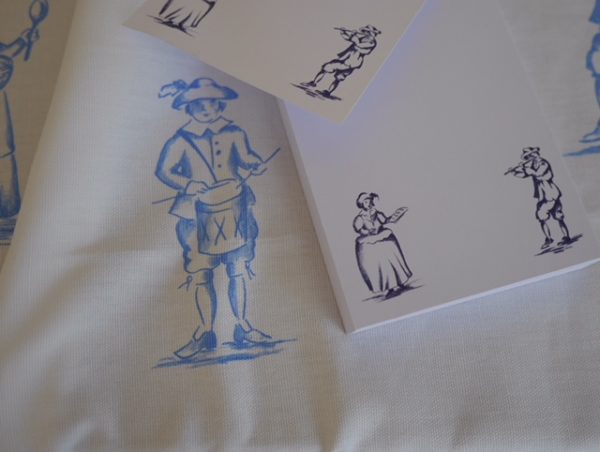 The Dutch in the Netherlands were unique in embracing the printed songbook, developing it into a fine art itself. The most popular songs were about love.  These prized possessions became more elaborate as publishers became competitive. They often included engraved illustrations and poetic verses. Young men would give them to their sweethearts as love tokens, as the songbooks could be small.