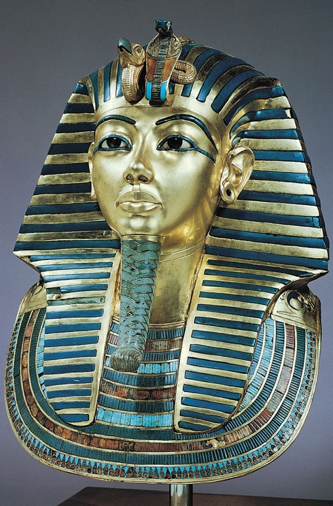 Tutankhamun’s funerary mask (reigned 1332-1323 BC). Discovered by Howard Carter in 1925, now housed in the Egyptian Museum in Cairo.

Blue is all around us.  As the renowned British presenter and naturalist Sir David Attenborough reminds us, our beautiful Earth is so abundant in oceans, it is often referred to as The Blue Planet.  Yet, as surrounded by blue as we are, it has not been the easiest colour from which to create pigment. Early cave paintings were often comprised of browns, yellows, reds and blacks, derived from colours of the soil and other natural resources that were easily accessible.  Sourcing natural blue to use as a pigment however was another story…

The Egyptians paved the way to blue when they discovered a semi-precious blue stone that could be used as a pigment.  Unearthing this rare and beautiful blue, by travelling all the way across to Afghanistan, down to the Kokcha Valley, the Egyptians gave it the name of khesbed, a synonym for joy or delight.  We now know this as lapis lazuli. Lapis has since been mined for over 6,000 years in this northern region of Afghanistan.

Initially, the extracted colour was used for beads, jewellery, inlay, and to adorn the pharaoh’s tombs. Blue was as highly regarded as gold and silver, due to its rarity. One of the masterpieces of art to come out of this period is Tutankhamun’s funerary mask, which is encrusted with lapis lazuli, turquoise and other semi-precious stones. The inclusion of lapis here was not only for decorative purposes, but it has also been implied that it was to assist in guiding the Egyptian pharaoh on his way to the stars in heaven and for good fortune in his rebirth.

It is believed that Cleopatra (c.69 – 30 BC) used deep blue eye shadow from powdered lapis lazuli pigment. Photo of Elizabeth Taylor in the 1963 film Cleopatra, directed by Jospeh L Mankiewicz.

The famous Cleopatra, the last ruler of Egypt, was known for her impressive and colourful makeup. It is believed that she wore crushed lapis lazuli on her eyelids, a style that was adopted by the actress Elizabeth Taylor in the 1963 film of Cleopatra.  Many Egyptians are thought to have worn makeup, and specifically blue, for symbolic reasons, to honour the gods and call upon them for protection.

Yet lapis continued to prove difficult to attain due to its rarity.  Undeterred, as a substitute, the Egyptians actually created the world’s first artificial pigment. They experimented with heating lime, sand and copper into calcium copper silicate and created the turquoise pigment, Egyptian Blue, that the Romans called caeruleum, and from which the English word cerulean blue derives.  This pigment can be found on statues, tomb paintings and sarcophagi as well as ceramics. It eventually spread throughout the Mediterranean.

In order to use the pigment for painting, they would have had to finely grind it down and then mix it with gum Arabic or egg to make tempera paint.  Still today there exists quite a number of artefacts of Egyptian faience (glazing pots and earthenware) in which Egyptian blue was a dominant pigment. The motifs artists would employ on these objects were predominantly floral or linear patterns. This chemically produced blue was also used as a mineral for glass, and for making beads and jewellery. 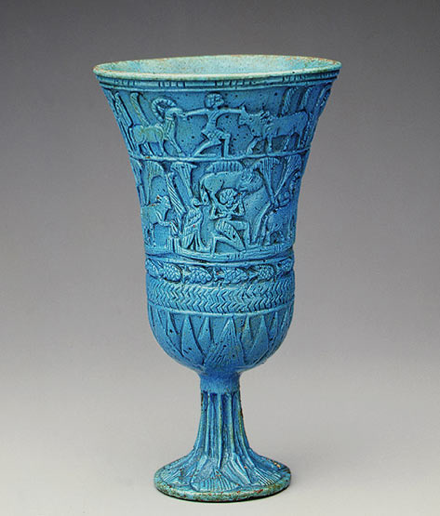 The Egyptians favoured the colour blue as they were influenced by its symbolic associations. They associated blue in their artworks with allusions to life, rebirth and creation.

A few hundred years later during the Greek era, the Parthenon Sculptures were created, which are now displayed at the British Museum.  Intriguingly, they would have originally been decorated in several colours, however, their bright colours have almost entirely faded now, which is why people often think of ancient sculpture as being entirely white. The Museum discovered through scientific imaging investigations that there were traces of Egyptian blue still visible on these magnificent carvings.

On one of the sculptures of Iris, the winged messenger goddess, traces of blue have in fact been discovered on her belt, underneath which her flowing drapery clings to her body in suggestion of flight. It is plausible that their overall use of colour, but also keen attention to use of Egyptian blue was due to reverence for the gods, as it is thought that the sculptures themselves were intended as an offering to them.

Although blue pigment before the Egyptian period proved difficult to locate, it is clear that from a very early time blue has always been considered a precious, decorative and even symbolic colour to many, and its presence happily remained in art of all kinds for expressive purposes…. 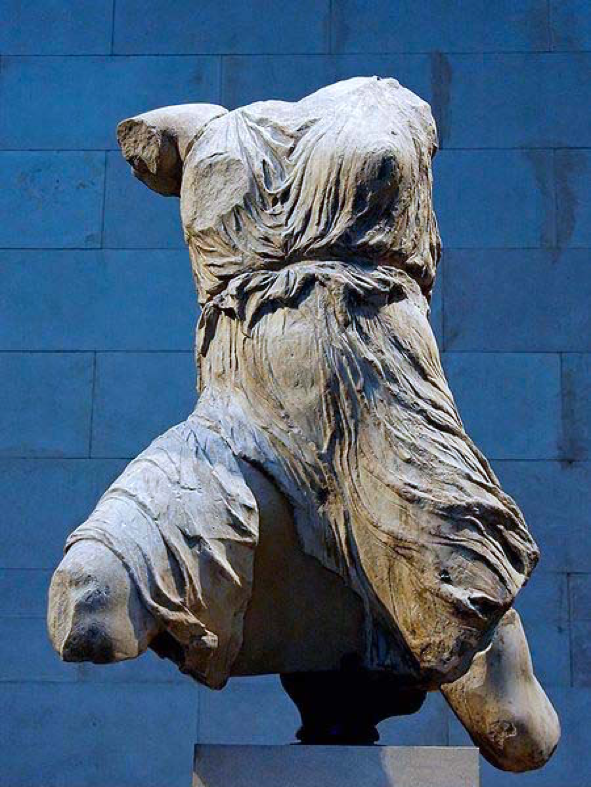