Still life has been a key genre in the canon of Western art since the Renaissance, with its ‘golden age’ flourishing in the Netherlands during the seventeenth century. In this genre, a selection of objects such as crockery, flowers, food and game are arranged most commonly on a table or platform. 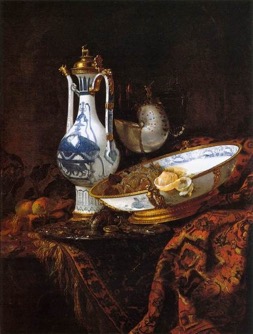 This style was once perceived as one of the less important themes to paint. In the eighteenth century a hierarchy of genres was devised by members of the French Royal Academy in which paintings of historical and religious events came first, and landscape and still life last.  Thus it was largely born in the Protestant republic of the Netherlands where there was less interest in religious scenes than in the southern European countries.  Due to the trade with the West and East Indies in the early 1600s, civilians of the Dutch Republic also became extraordinarily wealthy and still life painting was a fundamental way of conveying their variety of possessions. Paintings were rendered with extreme precision, focusing on a wide range of colours, in an attempt to create the illusion of reality or trompe l’oeil.

The sudden emergence of flower still life at this time was most likely linked to scientific developments in botany and horticulture that arose in the sixteenth century. It was the great age of plant collecting. The Netherlands became the largest importers of new, exotic plants and flowers from all around the world. Flowers from different countries were arranged together for painting, some of them added to the arrangement from other drawings as they bloomed at different times of the year. They were costly and precious, tulips especially, selling sometimes for the same price as a house! 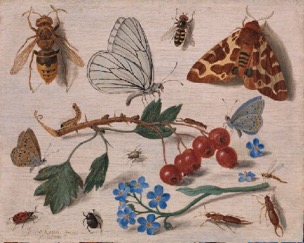 The Dutch East India Company brought and traded exotic plants from all around the world to the Netherlands. All of these precious plants and flowers were nurtured in Amsterdam’s Hortus Botanicus, established in 1638. Dr Frederik Ruysch lectured there and his daughter, Rachel, eventually became known as ‘Holland’s art prodigy’.

In A Spray of Flowers we can see Rachel Ruysch’s deep understanding of the natural world, in part influenced by her father. Emerging out of darkness, the still life is dramatically lit, with the colours blue and white focal in the composition. Interestingly, it has been proposed by historians that the Ruysch family’s crest was a blue rose. Rachel renders the flowers with the meticulous attention to detail, focusing on the thin twisted movements of the vines and white petals of the peony. 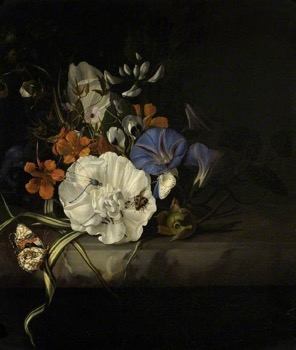 A Spray of Flowers, Rachel Ruysch 1690, oil on canvas. The Fitzwilliam Museum, Cambridge.

The microscope was invented in the late sixteenth century by the Dutch, encouraging people to look more closely at nature. It is evident that these artists painstakingly examined the surfaces and textures of their compositions, perhaps aided by new scientific developments such as the camera obscura; records show how this optical device was starting to be used more widely as a drawing tool by the 17th century.

Such detail emphasised a sense of fragility in the overall composition as tiny, intricate fragments of the still life were included. In Ruysch’s work for instance, the dragonfly which is just visible, hovers over the white peony with translucent wings, and the folds of the twisted petals underneath look as though they could blow away at any second. In this way, they remind the viewer of the delicacy of life and act as a momento mori; a translation from the Latin meaning ‘remember you will die’, the inevitable brevity of all things…

These artworks also attempt to somewhat replicate our experience of touching these surfaces in real life, offering contrasts between textures. In Ruysch’s painting, we see the soft lightness of the flowers  juxtaposed against the hard, cold marble slab that they sit on.

One of the masters of elaborately capturing the illusion of texture was Ruysch’s teacher Willem van Aelst. He was very well respected, having been court painter to the Medici in Florence. His painting Still Life with Dead Game shows a dead pheasant, positioned elegantly in the centre, hanging upside down with wings flayed, three smaller birds above it. Van Aelst shows off his ability to paint textures like his rendering of the sumptuous velvet bag, painted in ultramarine, as well and the crispness of each of the bird’s feathers. Here is a more obvious reference to and reminder of death. 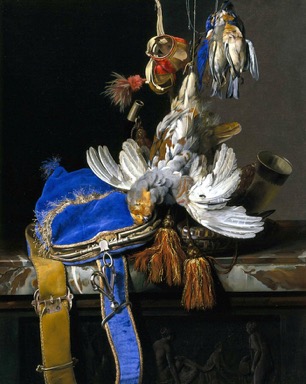 We spoke to Hanneke Grootenboer, Professor of History of Art at Oxford about the availability of pigments at this time. She commented that “through international trade, pigments were relatively available but also dependant on it. It has been argued that when trade was low in the 1620s, the ingredients for bright pigments were hard to find. The result was monochrome still life paintings (like the ones by Claesz and Heda).  After the mid-century, colours grew brighter, pictures bigger, and more expensive. Jan van Huysem’s paintings were among the most expensive ever.” 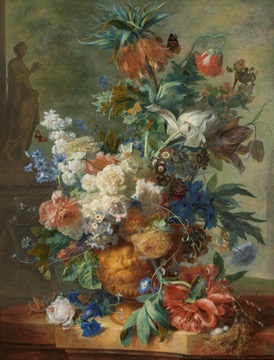 The Dutch still life artists gave the genre a firm place in the Western canon of art and their work went on to influence many Modernist painters, the most notable being Paul Cézanne, who created a number of still life paintings of flowers and of simple household objects. In both cases, inanimate objects gave the artists the ability to extensively examine them. For the Dutch it was also a way to exhibit the wealth, culture and trade of the Netherlands, whereas Cézanne was on more of a personal mission in search for the truth of painting through analytical study of the most fundamental of forms… 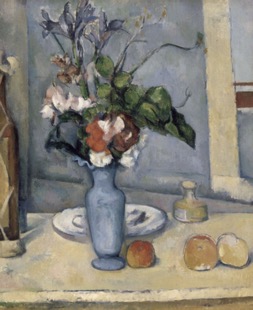