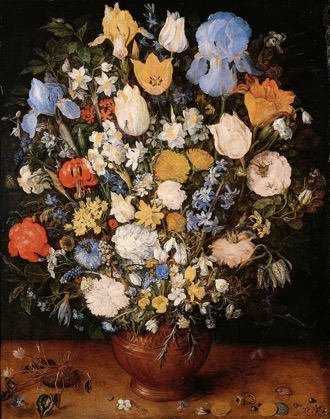 Jan Brughel the Elder, Small Bouquet of Flowers in a Ceramic Vase, 1599. Oil on Panel.

Flowers in their infinite varieties have been used to convey meaning in art for centuries. One of the most celebrated Dutch flower painters of the early 17th Century, Jan Breughel the Elder, was also one of the first artists to create still life paintings where flowers were the primary and sole subject. This trend for what is known as ‘pure flower paintings’ grew into an entire genre of still life, and painters would travel the globe to make studies of exotic and beautiful flowers in all different seasons. The final compositions depicted a fantastic bouquet which in reality could never have bloomed at the same time, rendered in exquisite detail and glowing colour.

“The artist is the confidant of nature, flowers carry on dialogues with him through the graceful bending of their stems and the harmoniously tinted nuances of their blossoms. Every flower has a cordial word which nature directs towards him.” Auguste Rodin

The dialogue of the tulip, arguably one of the world’s most elegant flowers, is a rich and colourful one. The flower seen as a symbol of renewal, refreshed perspectives and eternal love due to its tenacious ability to return every year. It features prominently in Dutch golden age paintings. Visit Holland any time between mid-April to early May to see field after field glowing with the colour of thousands of tulips, a spectacular patchwork blanket of the flowers which flourish in the long cool Dutch Spring. 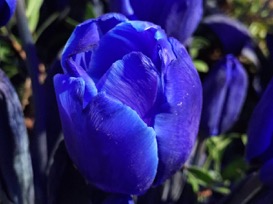 Interestingly the tulip does not originate from Holland: it was first found in an area stretching from Southern Europe to central Asia. The striking flowers caught the attention of the west in the 16thCentury and quickly became a coveted luxury item. The 17thcentury was a very prosperous period in Dutch history and the trade in exotic flowers, and particularly in the beautiful tulips, flourished.

This demand for the flowers caused a phenomenon in the 1600s known as ‘tulip mania’. Tulip bulbs were traded for astonishing sums of money; but only to be sold on rather than grown. Then in 1637 the market collapsed. Men who were once the richest in Holland were left with nothing but a few now worthless bulbs. Despite the catastrophic financial consequences of this crash, tulips maintained their popularity, and remained a favoured subject in Dutch art for the next two centuries. 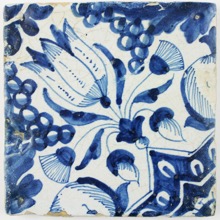 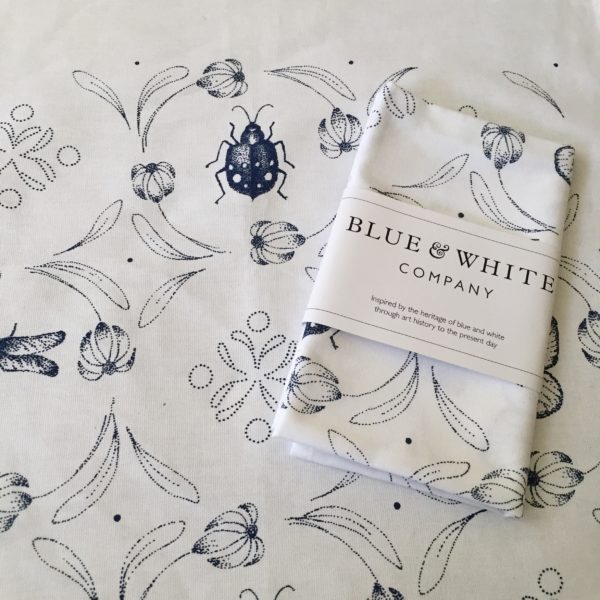 The depiction of the tulip in art also has connections to another age and culture: The Ottoman Empire. In Turkish, tulips are called “lale”, which when written in Arabic script bears orthographic and onomatopoeic similarities to ‘Allah’. As a result, Tulips have come to be viewed as a holy flower and symbol, and their form has been widely used in the decorative art and patterns of the Empire. In Turkish art the blooms favoured are far more slender and bear more distinctively pointed petals than those associated with Holland. The influence of blue and white patterned Chinese Ceramics can be clearly seen in the Iznik Ceramics of the Ottoman Empire. 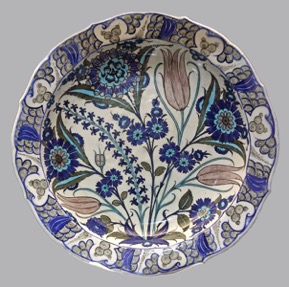 The Hyacinth, another flower favoured in botanical art, comes in two main varieties: the common Hyacinth, whose petals which open fully like stars, and the grape Hyacinth. 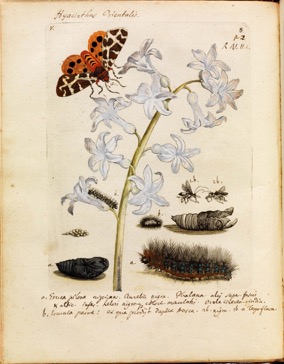 According to Greek legend, a beautiful boy named Hyacinthus was adored by the gods Apollo, and Zephyr, the god of the west wind. The two gods competed for the affections but because of their rivalry Hyacinthusdied. Apollo, distraught, created a flower in his honour and named it after his lover. The Hyacinth was considered by the Ancient Greeks to be the most beautiful of all the flowers. 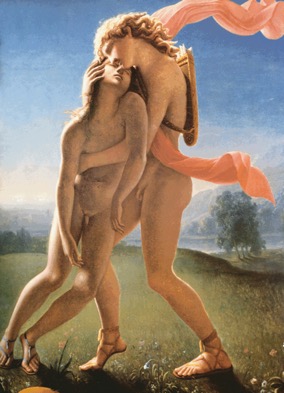 The Death of Hyacintos, Jean Broc. 1801 Oil on Canvas.

The blue variety of Hyacinth symbolises sincerity and constancy and because of its association with spring its presence often means newness and a fresh start. 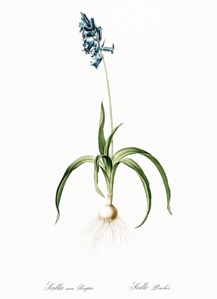 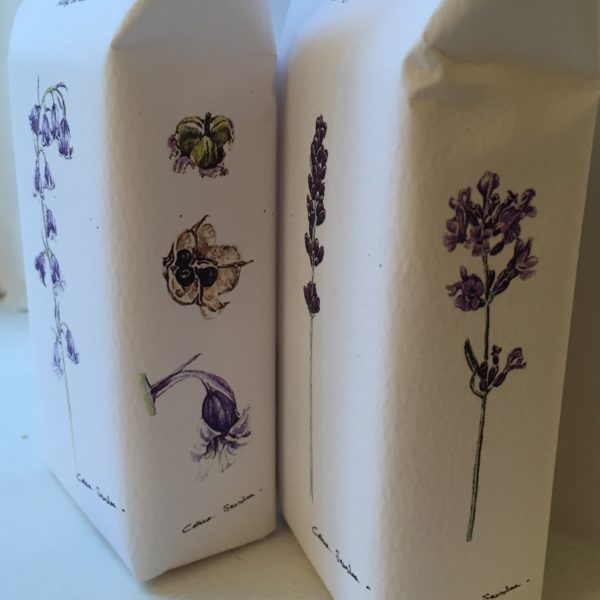 Soap with botanical illustrations are available in our Pocket Gifts collection

The bluebell carpets much of England’s ancient wooded areas during late April and May and is unusual for its colouring as a naturally occurring blue flower. This particular colour is relatively rare in nature, less than ten percent of all species of flowering plants are able to produce a blue flower. According to English folklore it was considered the flower of the fairy folk. To “ring” the bell like flower head would be an invite to call the fairy people, with their powerful magic. Traditionally, many people would go out of their way as so not to disturb the flower when they walk in the woods. The bluebell is associated with humility and reflection for the way that it hangs its heads as if in quiet contemplation. 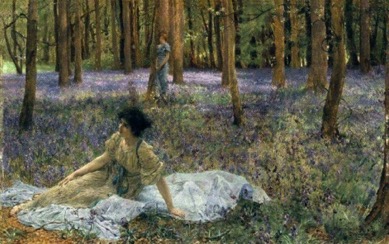 Dainty Forget-Me-Nots grow well in the English climate. Their scientific name, Myositis, comes from the Latin word “myos” meaning ‘mouse”because the tiny petals look like the ears of mice! As their common name suggests, these tiny but plentiful flowers have connections with remembrance, loyalty andundying love, and were often worn by those separated from their loved one as a symbol of their fidelity.

Detail from: Insects with Common Hawthorn and Forget-Me-Not. 1654, Jan van Kessel the Elder

Forget-me-nots are often found in botanical paintings because their numerous flowers add a lovely injection of depth and colour to any arrangement. They will grow well in the garden because they flourish in even shady boarders and are not difficult to cultivate. They are also an excellent flower if you want your garden to be more bee-friendly, as forget-me-nots, like bluebells, are favoured by the little yellow visitors.

Indeed insects, as much as flowers, were a hugely important component in botanical art. If flowers represent the earth, insects were often used as an allegory for air. As previously explored in one of our other journal entries, the lovely botanical artist Maria Sibylla Merian paid close attention to insects and included them in many of her illustrations. Insects were also frequently depicted in Dutch floral still life arrangements, to bring more life and movement to the work. 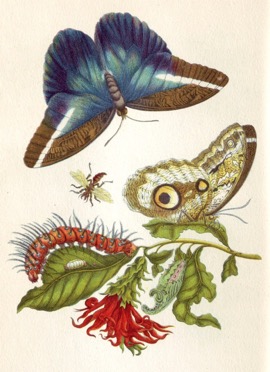 As with flowers, insects often had different individual symbolism within a painting. The butterfly, for example, is a strong motif of life, happiness, purity and memory. Traditionally an icon of rebirth and resurrection because of its complex life cycle, in some cultures this astonishingly delicate and beautiful insect represents the living on of the human soul. Their fragility but endurance, and eventual transformation, is a symbol of positivity and hope for people who have come through hardship or sorrow in their lives. 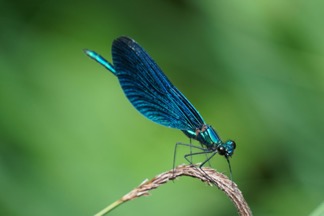 The dragonfly, like the butterfly, also symbolizes change and transformation. Its metamorphosis has associations with growing wisdom, maturity and self-realisation; an insect which embodies the image of personal growth and wisdom. With its beautiful magical iridescent blue colouring, the dragonfly an insect of happiness, of living life in the moment and to the fullest, such a positive and life-affirming image to bring into the home.

The appeal of botanical art has endured as generations of artists have drawn inspiration from nature. It is still possible to enjoy the blooms of all the seasons in one bouquet, and to benefit from their quiet, calming beauty as we relish these days of spring…? 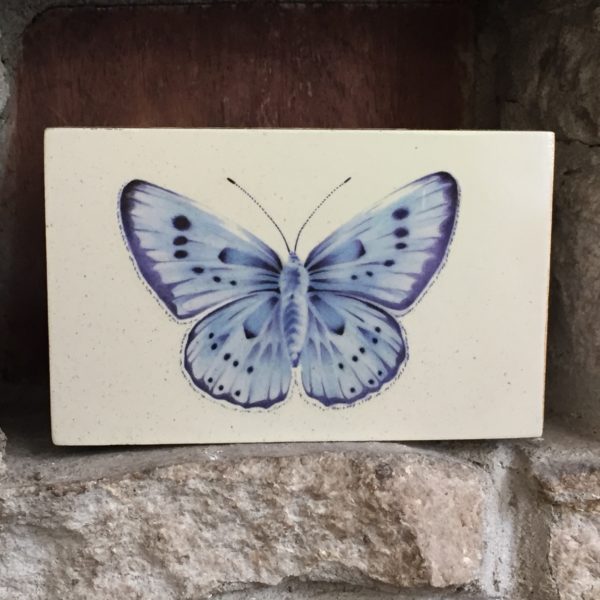 A wooden matchbox with our signature blue butterfly