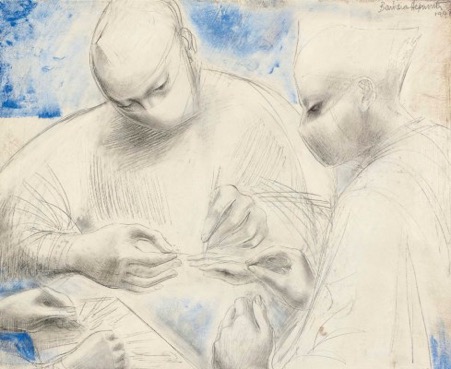 Trio (Tendon Transplant) by Barbara Hepworth 1948. Oil and pencil on gesso-prepared board.

Faded, monumental figures loom out of a haze of muted blue and white tones. Classical in representation and with an air of piety, this drawing looks as though it could be a fresco by an Italian master, fading away on the wall of a stone chapel. In fact, Trio (Tendon Transplant) is from a series entitled Hospital Drawings of around eighty works by the famous British sculptor Barbara Hepworth, completed between 1947 and 1949.

Shortly after the outbreak of war in London, Hepworth and her husband, the artist Ben Nicholson, moved from their Hampstead studio to the tranquil seaside town of St Ives in Cornwall with their triplets Simon, Rachel and Sarah. St Ives had become amongst other towns a refuge for many artists during the war.

In 1944 their daughter Sarah fell ill with the bone disease osteomyelitis. The couple struggled to afford the medical bills for her surgery (this was just before the NHS had been established in 1948).

Hepworth received much sympathy from one of the head surgeons at the hospital, Norman Capener, who later became a friend, he was very interested in Barbara’s work, being an amateur painter himself. Capener began purchasing some of Hepworth’s art, which in turn helped with the costs of her daughter’s surgery.  He later asked the artist if she might be interested in observing some of the procedures taking place in the operating theatre. Hepworth, initially horrified by this thought, decided to go. The materials that she needed to make her sculptures were scarce during postwar Britain, meaning she also had more time on her hands to explore other projects. 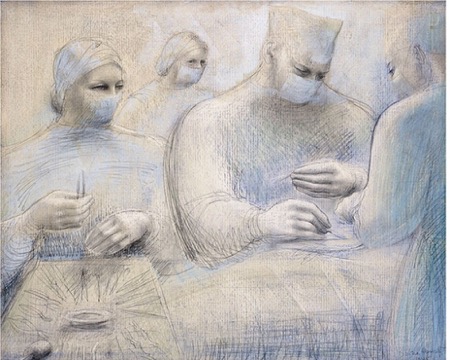 Trio (Surgeons and Theatre Sister) or The Conclusion by Barbara Hepworth, 1948. Oil and pencil on board.

Hepworth soon became fascinated with the surgical process. She was particularly moved by the methodical rhythm of the surgeon’s hands and the concentration in their eyes.  The eyes and hands are rendered with a delicacy and softness, with attentively modulated grey-white tones. They emerge from the cruder, more abstract marks in blue, green and other similar hues. Her drawing techniques somehow brings the scene to life; the many flowing lines are suggestive of the creases forming in the doctors’ blue gowns, created by their constant movement around the horizontal, inert patient. After many visits, Hepworth had created a body of work which revealed her wonderful abilities as a draughtsperson, as well as a sculptor. 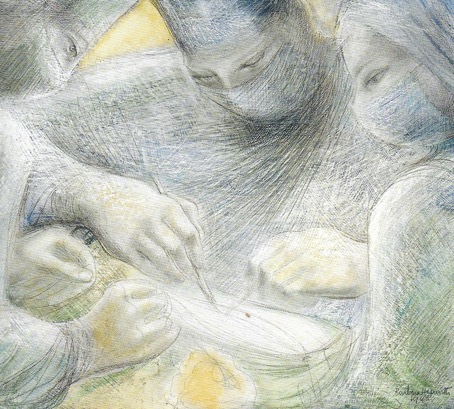 Concentration of Hands II by Hepworth, 1948. Oil and pencil on board.

The way that Hepworth physically worked on these was akin to her sculptural methods in many ways. She even referred to her drawings as ‘sculptures born in the disguise of two dimensions.’ They were done on gesso board but their textured undercoat is Ripolin paint, mixed with white lead and chalk and then scraped down with a sharp blade. Afterwards, she added a thin coloured oil wash such as blue, and then, as she might in her sculptural work, would ‘scratch with a razor blade to reveal areas of white ground.’ The drawings and the predominant use of white in these works gives the figures a sculptural quality too as if they were hewn and carved from marble or stone. They have a three dimensionality to them, like ancient Greek or Egyptian bas-relief sculptures or friezes. 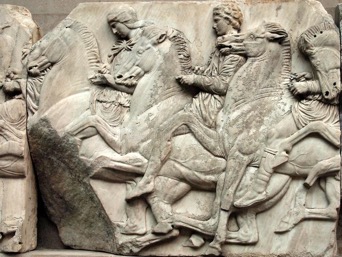 The Parthenon Frieze, to adorn a temple dedicated to the goddess Athena between c. 443 – 437 BC

Her weighty, crosshatched figures resemble the perhaps better known figures in the Shelter Drawings by Henry Moore. This series depicts people taking shelter from bombs during the War, sleeping in the London Underground. Moore used a mixture of graphite, ink, wax and watercolour. His technique evokes the dismal gloom and bleakness of the Blitz; the sleeping bodies emerge out of thick, black darkness. Although their techniques may be similar, Hepworth’s surgeons are like otherworldly angels robed in white, immersed in the sterile, clean environment of the hospital. Her use of pale colours like white and blue are far from the blood and gore of surgery as we know it, instead emphasizing the skill of the doctors and their mission to save lives. Yet both works convey an intensity in their mark making and scratched surfaces, lending a raw and earthy quality overall. 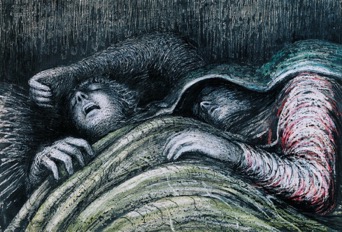 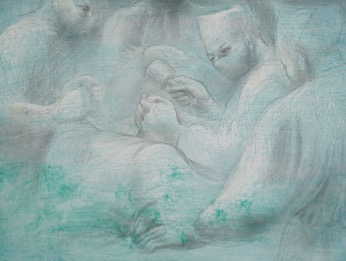 Blue and Green (Arthroplasty), Hepworth, 1948. Oil and pencil on card. 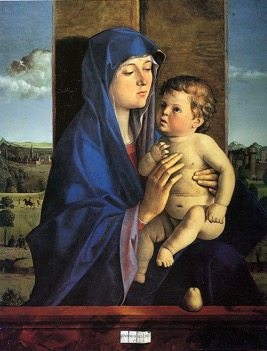 Madonna with Child by Giovanni Bellini, c 1485. Oil on panel.

The artist does not focus on the fear and pain associated with surgery, but rather offers a different perspective. The surgeons’ everyday work is elevated. The drawings allude to a purity and spirituality commonly found in neo-classical religious painting. The classical proportions and harmony are akin Leonardo da Vinci’s studies, particularly the hands. In fact, the clasped hands of the doctors sometimes look as if in prayer, like the Virgin Mary who was predominantly depicted with the precious lapis lazuli blue pigment. Perhaps Hepworth’s predominant use of blue in these drawings have some connection to this history… 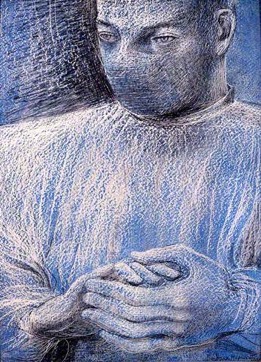 Surgeon Waiting by Hepworth, 1948 (oil and pencil on paper) 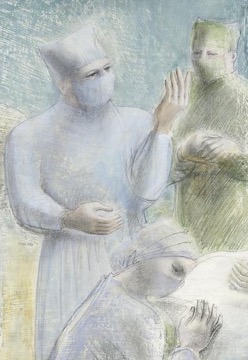 Detail from Prelude II, 1948 (oil and pencil on panel)

Hepworth said herself of the experience: ‘From the very first moment I was entirely enthralled by the classic beauty of what I saw there; classic in the sense that architecture and function were perfectly blended, and purity of idea and grace of execution were in complete harmony.’ Hepworth had been on a scholarship to Italy as a student and would have encountered works of art by Italian masters, which have clearly influenced the Hospital Drawings.

These little-known drawings are so beautiful and unexpectedly soothing, giving us a rarified glimpse into the very private world of operations and surgery, usually hidden from public view. With her subtle modulations and predominant white and blue tones, she focuses on the absolute absorption of the doctors. There is quite a special affinity that Hepworth realized between sculptor and surgeon in their processes, which influenced many of her later forms. 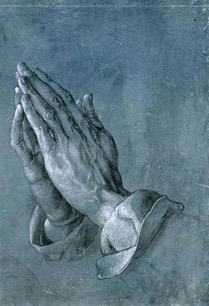 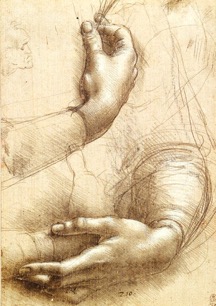 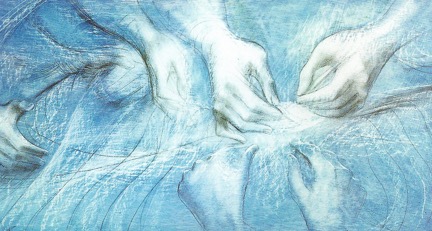 Hands Operating by Hepworth, 1949. Oil and pencil on board. This drawing was done on a ground of ultramarine blue to heighten the intense light and adds to the overall tenderness and calm of the work.