Bacchus, Mercury and the Graces, Palazzo Ducale, Renaissance, Save Venice, The Origin of the Milky Way, Tintoretto, ultramarine, Venice, Venus and Ariadne 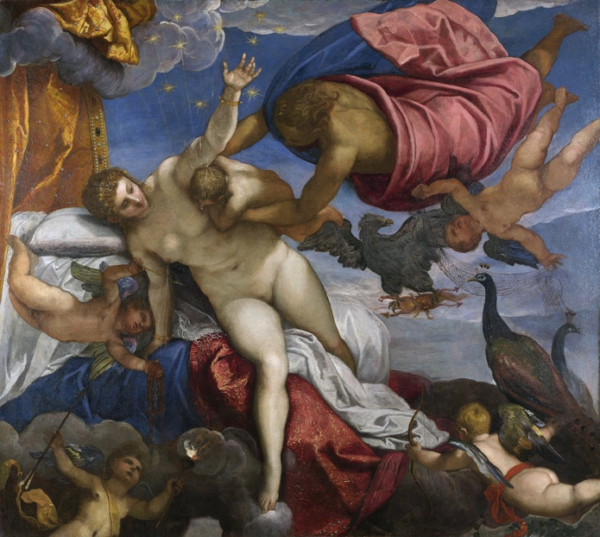 The Origin of the Milky Way by Jacopo Tintoretto, c. 1575. Oil on canvas, National Gallery, London

This year marks the 500th anniversary of Jacopo Tintoretto’s birth, an artist who is one of Venice’s most prolific painters. Save Venice has funded the restoration of many paintings by the cherished Tintoretto, who has more than seven hundred paintings all over the city. This is an American and Venetian non-profit organisation, which over the decades been raising money to restore and preserve the priceless art and architecture of Venice. More than thirty international committees were formed under the administrative umbrella of UNESCO and they were mostly created after the serious damage caused by the worst flood Venice has had in the last century, in 1966. This year in October, Venice will hold a weekend of events honouring the artist’s life and work.

He was born in early autumn in Venice in 1518 as Jacopo Comin, the eldest of twenty-one children!  His father Giovanni was a dyer or tintore, which is why Jacopo got the nickname of Tintoretto meaning ‘little dyer’ or ‘dyer’s boy’.

Venice had for the longest time been a predominant power in the Eastern Mediterranean, and a central trading port. In the twelfth century, a new and exciting pigment arrived in Venice, before it had reached the rest of the world. This wonderful pigment was ultramarine obtained from the precious stone Lapis Lazuli from Afghanistan. Tintoretto and many other Renaissance artists used this luscious, rich blue in their paintings dotted around Venice. 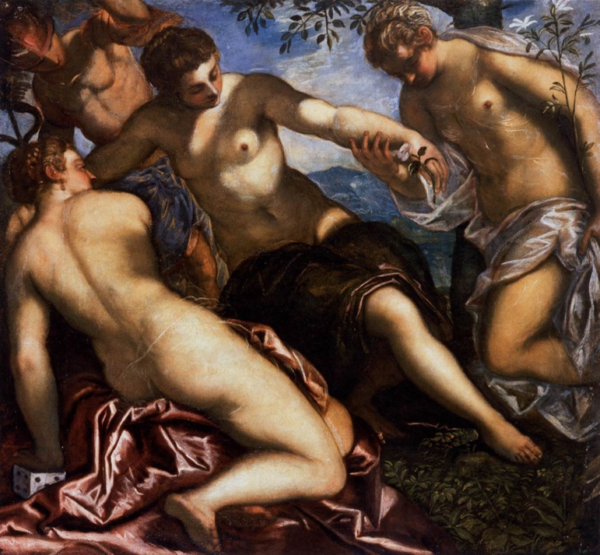 Mercury and the Graces by Jacopo Tintoretto, 1576-77. Oil on canvas. Palazzo Ducale, Venice.

Tintoretto completed many paintings for the Palazzo Ducale or the Doge’s Palace, perhaps the most important building in the city. It was the residence of the important political leaders or doges of Venice during the Renaissance. As part of Save Venice’s conservation campaign, four allegorical paintings of Tintoretto’s in the palace have been restored. These works (two of which are shown) depict classical myths, as was a common theme of the time and include great amounts of ultramarine blue. In each work, the otherworldly figures are carefully arranged across the canvas. The softness of the skin and musculature is emphasised. They gesture towards each other against a backdrop of blue sky. These kinds of paintings appealed to the political leaders in the Palace, who used them as political propaganda. The depiction of gods and goddesses in the allegories and the harmony of colours and figures extoled the unity and glory of the Venetian Republic, likening it to classical virtues.

In Bacchus and Ariadne, Bacchus emerges from the sea wearing a wreath of vine leaves and holding grapes. He falls in love with Ariadne and offers her a ‘crown of stars’ which he holds over her head.  According to myth, after Ariadne’s death (as an immortal), her starry crown was indeed placed among the stars, which is why the constellation is sometimes referred to as Ariadne’s Crown. It is more commonly known as Corona Borealis constellation (Northern Crown). Ariadne sometimes symbolises Venice, born on the sea and graced by divine favour.

The crown of stars takes us also to Tintoretto’s other painting, The Origin of the Milky Way, which is in London’s National Gallery. Jupiter is holding the infant Hercules, his illegitimate and mortal son, to the breasts of his wife Juno, hoping to immortalise him. The milk that spurts upwards forms the Milky Way.The subject of Bacchus and Ariadne would have been inspired by his teacher’s version, another deeply cherished Venetian artist of the time, Titian.

To find out more about Save Venice, their restoration work, upcoming projects and exhibitions, check out their website here.